Thai name : วัดสามประสบ
GPS : 15.128225,98.455861 (See on the map)
My opinion:
Wat Saam Prasob was built in 1950 and sunk in 1968 with My whole village who had to move on the hill where it is now after the construction of Khao Laem Dam. The temple is under the lake most of the year but during the dry season, he emerged with the lowering of the water level in the dam. It is more or less visible depending on the time of year, knowing that it is obviously more interesting when it is most clear towards the end of the dry season.
My pictures were taken in late December, a year in which he particularly liked about Sangkhlaburi which explains why the Wat Saam Prasob is still far in the water.
Search visits in Thailand by destination

For a an hour boat trip including the visit of sunken temple visit, count 250-300 THB.

How to get to Wat Saam Prasob, the Sunken Temple ?

You can only get to Wat Saam Prasob, Sangkhlaburi's Sunken Temple by boat. There are some boats near the Mon bridge that offer a one hour ride on the lake to discover this temple and the surroundings.
To go visit Wat Saam Prasob, the Sunken Temple, you can also book one of the tours below. 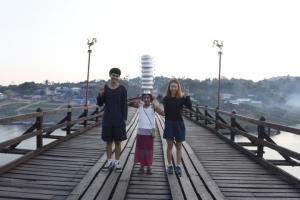 Sangkhlaburi is a place of serenity, where there are many gorgeous sceneries, such as the Wooden Bridge at dawn and dusk, a boat trip to the Sunken Temple and Wat Wang Wiwekaram Temple, and many more! You must not miss this trip!

Wat Saam Prasob, the Sunken Temple is a temple and when you visit a temple in Thailand there are some rules to know and follow :